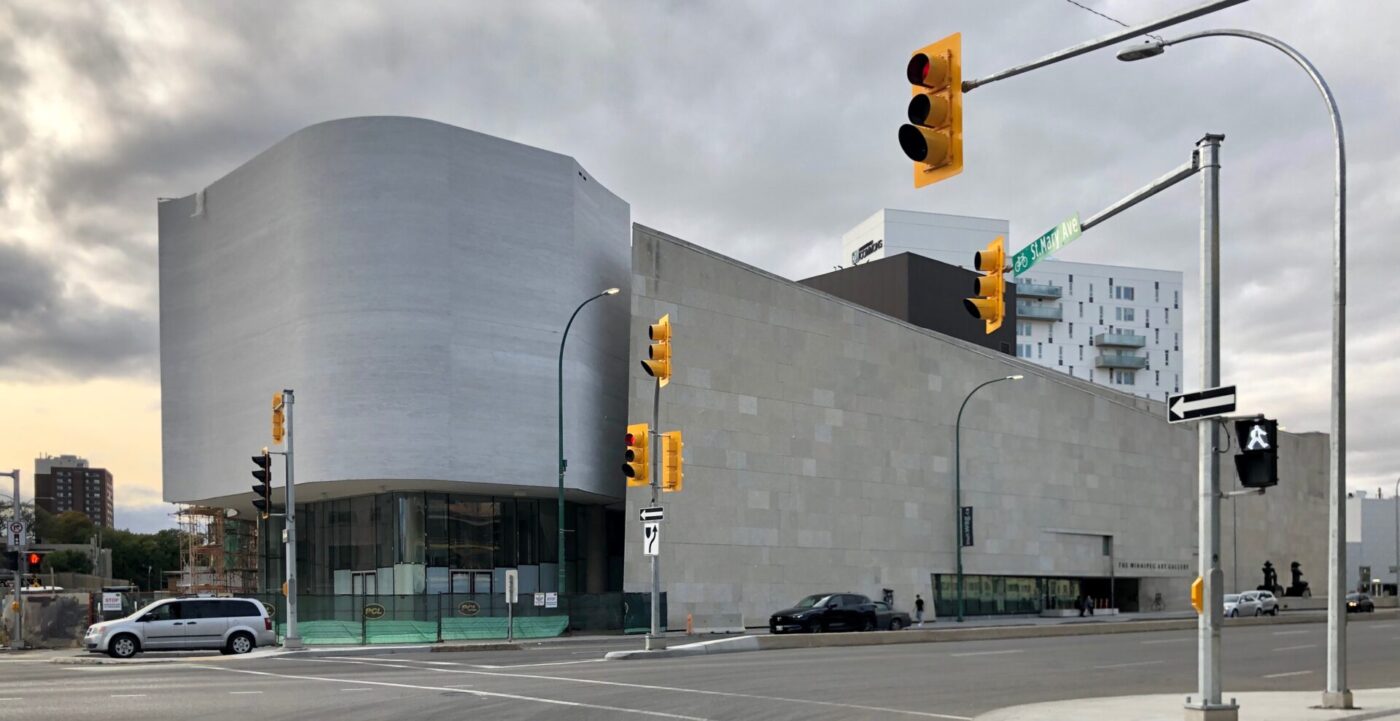 Over the summer, a circle of language keepers from Indigenous nations across Inuit Nunangat (the homeland of Inuit in Canada) and Treaty 1 Territory in Manitoba gathered to give Indigenous names to the Inuit Art Centre and the spaces within. This is an important step on the WAG’s journey of decolonization.
Watch the announcement:
What was formerly known as the Inuit Art Centre will now be called Qaumajuq (pronounced how-ma-yourk or sometimes heard KOW-ma-yourk), Inuktitut for “it is bright, it is lit.” This name celebrates the light that flows into the building.

In response to United Nations Declaration on the Rights of Indigenous Peoples Article 13 and the Truth and Reconciliation Commission of Canada’s Call to Action 14i, Indigenous languages Inuktitut (Inuit), Inuvialuktun (Inuit), Anishinaabemowin (Anishinaabe/Ojibway), Nêhiyawêwin (Ininiwak/Cree), Dakota, and Michif (Métis) will now have a real and presence throughout WAG-Qaumajuq, welcoming visitors to the Gallery. It is the first time an Indigenous naming of this kind has occurred at a major art institution in Canada.

The circle also gave the WAG building an Ojibway name: Biindigin Biwaasaeyaah (pronounced BEEN- deh-gen Bi-WAH-say-yah), an Anishinaabemowin phrase meaning, “come on in, the dawn of light is here.” Your WAG will always be known as the Winnipeg Art Gallery or WAG, but it has now been endowed with an Indigenous name from Treaty 1 Territory.

Discover the names of Qaumajuq’s interior spaces here. The names are filled with beautiful meaning that reflects the design and vision for the new centre and expanded WAG.

“The powerful presence of Indigenous languages in a colonial institution sends the message to Indigenous people that this is a place where we can feel safe and welcomed,” says Julia Lafreniere, WAG Manager of Indigenous Initiatives. “It is a space for us and for everyone in the community.”

Celebrate with us! Join us for the one year anniversary of Qaumajuq with FREE admission April 8-10!

with Boogey the Beat

Celebrating the Opening of Qaumajuq

At the end of March 2021, Qaumajuq (the Inuit art centre) opened virtually to Manitobans and audiences around the globe. While we couldn’t gather in...

You’re what’s been missing from WAG-Qaumajuq. Our new building was open for a few weeks this past spring before the pandemic shut our doors again....

Qaumajuq in the Paallirmiutut dialect means, “light (it gives off)”

Qaumajuq in the Paallirmiutut dialect means, “light (it gives off)” – by Dr. Norma Dunning What is light? How does it work? Is it only...

Wrapping up the Inaugural Year

This spring marks the end of the inaugural year of Qaumajuq, and we are just getting started! Looking back on the last year, it is...