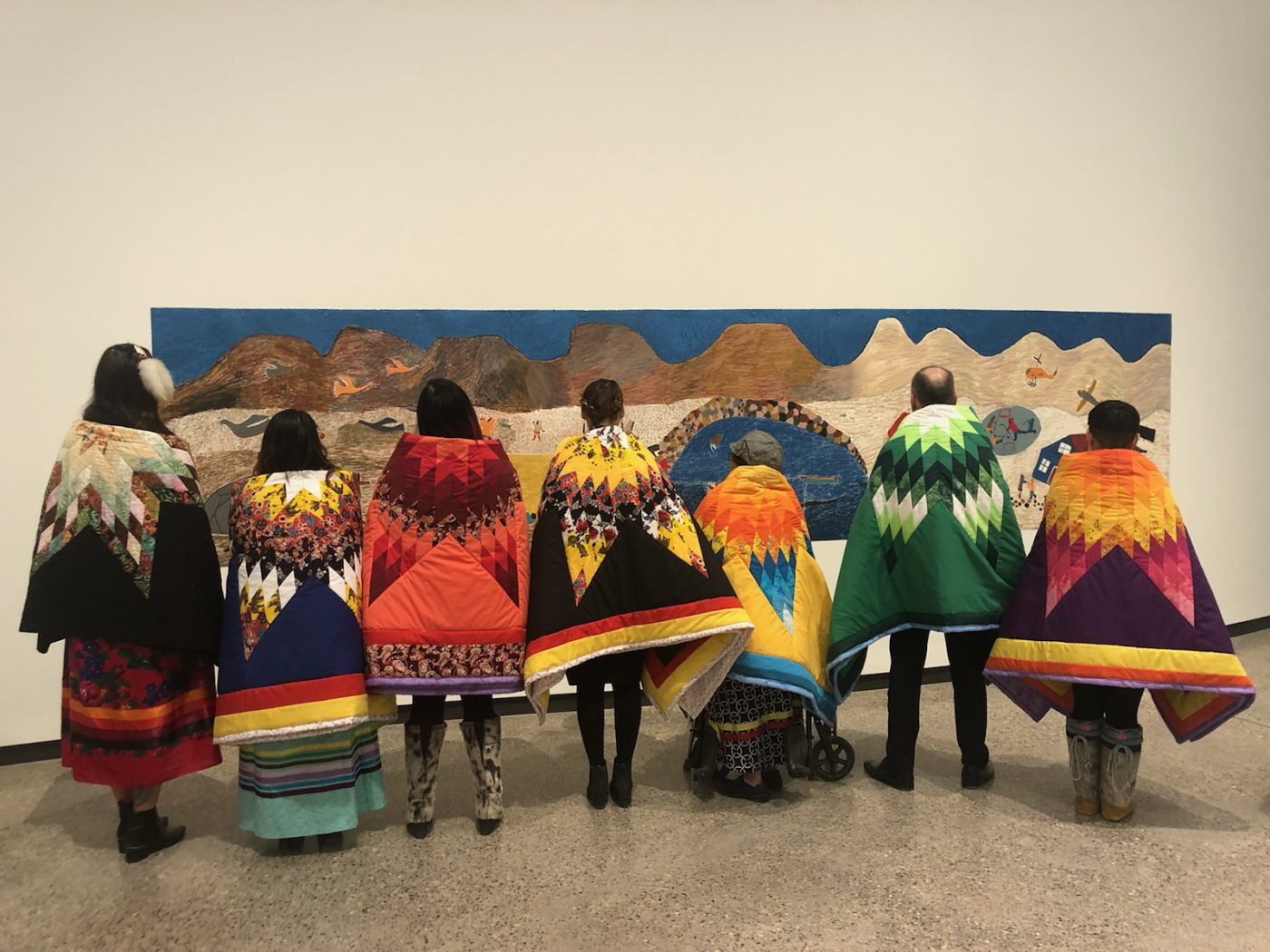 As part of Qaumajuq’s opening celebrations, we held a day of Ceremony with Indigenous ceremonial leaders and Elders, to begin this new journey in a good way.

In the summer of 2020, WAG Head of Indigenous Initiatives Julia Lafreniere passed tobacco to Dakota Grandfather Wanbdi Wakita and asked how to best host a Ceremony for the new Inuit art centre building. His directives were very clear, Ceremonial Leaders from each of the seven Indigenous nations of Manitoba would welcome the artworks and building to this land, Treaty 1, Metis and Dakota territory with a day of prayer. It was a day to honour the ancestors, nourish the Spirit of the artworks at the WAG, so that Spirit could be brought into the entire building – each room and gallery space – allowing for a safe opening. It laid the groundwork for continued Ceremony and the ongoing spiritual care the art and building will receive. This special day, generously supported by the Manitoba Arts Council honoured the care and commitment that has been put into creating Qaumajuq, and the Indigenous knowledge it holds.

A qulliq was lit, Sacred Pipes were lifted and an Eagle whistle was blown, some of the most powerful traditions from the first people of this territory, to invite the Spirits to come and join us in Ceremony. Prayers were said with the sacred Medicines for the protection of the building, the artworks and their Spirits, and everyone who comes through the doors.  The WAG is very grateful for the prayers of Dene ceremonial leader Victor Tssessaze and his son Daylan, Dakota Grandfather Wanbdi Wakita and Grandmother Pahan Pte San Win, Anishinaabe Elder Dr. Mary Courchene, Inuit Elders Martha Peet and Joachim Ayaruak, Metis Elder Marcella Vezina, Chief Dennis Meeches, Jolene Mercer, and OjiCree Ceremonial Leader Byron Beardy and his sons Jayden and Jackson III.

The WAG thanks Neepeekan Hunt for creating such special blankets with love. Dakota Elders took part in the ceremony, sharing their presence and the following words of wisdom:

Grandfather Wanbdi Wakita on the origin of star blankets:

“The old people told us that long ago, when the world was new, we came to live on Mother Earth from the Blue Star. We are the Blue Star people. Creator made it like that. Since that time, our people have had dreams and visions about the Blue Star. At first, to respond, they drew a blue star upon a hide blanket. Later, when we began to use fabric to make blankets, the Starblanket was chosen for its significance, meaning and connection to our origin. We understand these kinds of dreams and visions to be holy. When we put action behind them, good follows for the family and community. I am honoured to be here. I appreciate this Centre that will show the whole world the dreams and visions of our artists.”

“What do you think of when you see a blanket? You think of warmth, protection, comfort. In our family, and in our community, when someone does a good deed, we make a beautiful star blanket like this, and we put it around them. And we do that because it’s our way of saying this is our arms around you. You are being honoured and you’re being acknowledged. And when you take the blanket home, when you use it, when your gaze rest upon it, remember this is your community putting our arms around you and wanting you to have warmth, to have comfort, and to have protection, for all your days. Thank you for the good deed that you have done, something amazing that will have an impact on hundreds and thousands of people.”

Ceremonial Leader Byron Beardy shared an Honour Song as the Circle members attending in person were wrapped in the blankets. The song resonated throughout the space, inviting in Inuit and Indigenous traditions, knowledge, perspectives, and voices celebrated throughout the WAG and Qaumajuq.

It was a powerful moment in the history of the WAG to have the seven Indigenous Nations represented in Ceremony, prepare Qaumajuq to open its doors, and ready the Spirit of the artworks for visitors. We look forward to welcoming you into Qaumajuq.

One response to “Ceremony: Begin in a Good Way”

Join us for a lively and thought-provoking conversation around the founding of the province of Manitoba from a Métis perspective, in connection with the new exhibition Kwaata-nihtaawakihk — A Hard Birth, opening March 19.

Celebrate with us! Join us for the one year anniversary of Qaumajuq with FREE admission April 8-10!

with Boogey the Beat

Moving Art into the Visible Vault

The world’s largest public collection of contemporary Inuit art will soon be accessible for all to see in the new Visible Vault at Qaumajuq, the...

Celebrating the Opening of Qaumajuq

At the end of March 2021, Qaumajuq (the Inuit art centre) opened virtually to Manitobans and audiences around the globe. While we couldn’t gather in...

You’re what’s been missing from WAG-Qaumajuq. Our new building was open for a few weeks this past spring before the pandemic shut our doors again....

Qaumajuq in the Paallirmiutut dialect means, “light (it gives off)”

Qaumajuq in the Paallirmiutut dialect means, “light (it gives off)” – by Dr. Norma Dunning What is light? How does it work? Is it only...

Check out this fly-through video to explore Qaumajuq! We hope you enjoy the gorgeous footage and that it offers you a taste of what you...

Wrapping up the Inaugural Year

This spring marks the end of the inaugural year of Qaumajuq, and we are just getting started! Looking back on the last year, it is...

Relive the two-part virtual celebration of Qaumajuq, the new Inuit art centre at the WAG. Presented by BMO Financial Group, the virtual opening of Qaumajuq happened...

As the Winnipeg Art Gallery has evolved with the opening of Qaumajuq, the Gallery’s visual identity is also evolving to better reflect the important position...
Plan Your Visit