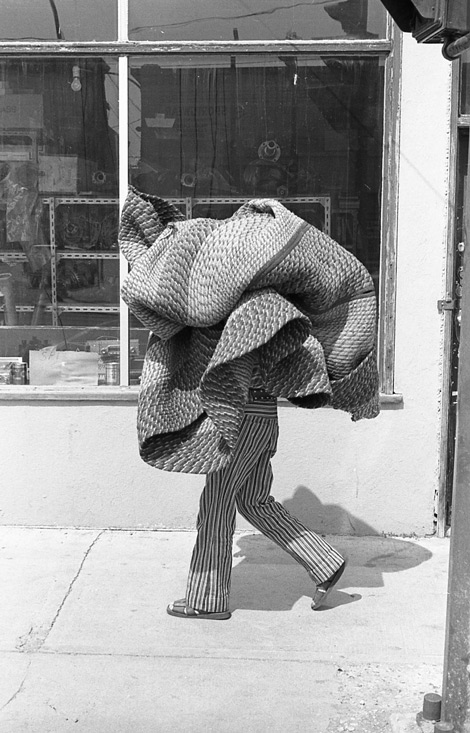 John Paskievich is an iconic Winnipeg photographer and filmmaker. Born to Ukrainian parents in a displaced persons camp at the end of WWII, he grew up in the city’s North End in the 1950s-60s. Following studies outside of Manitoba, he returned in 1972 and developed his photography and film craft.

Paskievich’s most significant body of work, citizens going about their daily lives from the 1970s to the 2000s, is featured in a new show opening June 29 at the WAG, John Paskievich: The North End. You will find the unassuming hustle and bustle that he captures brings out the life of the neighbourhood. The following interview transcription delves into his vision for the photographic series.

How were the photographs selected for this exhibition?

There were no hard and fast rules. Curator Andrew Kear selected 43 photos and I added six. I believe the result is a fair representation of my work and of Winnipeg’s North End.

How has the printing process with William Eakin unfolded? Has it in any way changed your relationship to the work?

The printing process with William Eakin was very informative. I have been taking photos all these years, and not printing or exhibiting much. I work in analog with film, and Bill has an extensive knowledge of digital printing methods. We simply discussed how the prints should look. It has been an opportunity for me to reconnect with still photo and get back in the loop with what’s happening in world photography, as in the past few years I have been focusing on my documentary films.

What would you tell Winnipeggers about the North End? What do you want them to know?

I hope they appreciate the photos as photos. The North End is a remarkable area with a storied history. Through the growth of Scottish, Eastern European, Jewish, Ukrainian, and Indigenous communities, the history of Manitoba is the history of the North End. Three very important movements illustrate the unfolding of major social issues: the arrival of the first Scottish settlers, the arrival of the first non-British people in Manitoba, and the return of Indigenous people to the lands from which they were displaced.

Looking back on the work, when I was photographing, I never thought of the word reconciliation. In hindsight, though, I realized I had been bringing together the European North End and the Indigenous North End through photography as they started to emerge. I think I was a kind of “unconscious reconciliatory.”

What does it mean for you to have your photos exhibited on such a scale at the WAG?

I’m honoured. The WAG has shown many internationally-renowned artists. To know that my work will be hanging on the same walls – it’s humbling.

By Amber O’Reilly with files from the Art Gallery of Alberta This summer at the WAG, from May 11 to September 8, Vision Exchange: Perspectives from...

Comprising 50 black-and-white photographs ranging from the 1970s to the 2000s, John Paskievich: The North End is the largest display to date of the artist’s...
COVID-19 Update