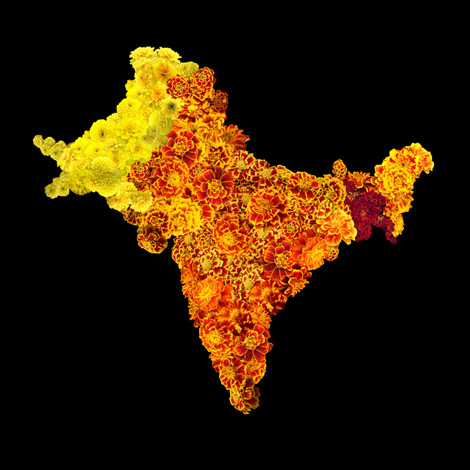 This summer at the WAG, from May 11 to September 8, Vision Exchange: Perspectives from India to Canada brings you the work of 20 contemporary artists of Indian heritage in the largest exhibition of its kind to be presented in Manitoba. Organized by the Art Gallery of Alberta and the National Gallery of Canada, artists within the exhibition address issues of shifting histories and borders; relationships to the land; as well as the complex themes of migration, immigration, and diaspora. This is a historic celebration for Winnipeg’s growing South-Asian communities, who are at the heart of WAG programming throughout the summer.

Devi Sharma, City Councillor for Old Kildonan and Speaker of Council, is serving as Honorary Exhibition Patron, working in collaboration with a group of local advisors. When they first saw Sarindar Dhaliwal’s the cartographer’s mistake: the Radcliffe Line, the question was raised whether the illustrated borders would cause controversy, but then they heard the intention of the artist.

Sarindar Dhaliwal is a Toronto-based artist. She was born in the Punjab, raised in London, England and has lived in Canada since 1968. Dhaliwal has exhibited widely in Canada since the 1980s. Her work examines Indian history and identity, and the experience of immigration and diaspora.

The cartographer’s mistake is a series of works in which the artist references Cyril Radcliffe, a British barrister who in 1947 was tasked with equitably dividing the provinces of Bengal and Punjab—450,000 km2 of territory with a population of 88 million. That border became known as the Radcliffe Line. Today its western side still serves as the Indo-Pakistani border with the eastern side as the India-Bangladesh border.

Dhaliwal explains: “Radcliffe was given mere weeks to map the demarcations that split the provinces of Punjab and Bengal between the two countries. He had never been to India and was not equipped with proper maps. The whole of Partition was kind of a disaster. History records the ensuing murder and mayhem that continue today due to the conflict, in which over 2 million people were killed. ”

In the cartographer’s mistake: the Radcliffe Line the artist uses marigolds to depict the borders and territories of her native land, which in some critical instances were divided according to the availability of resources and physical geography rather than demographics. Dhaliwal translates the ugliness of Partition’s communal violence into a living floral map of the Indian subcontinent as a whole.

“I grew the marigolds, photographed them and sourced other images of the flowers which were then digitally assembled into the map.”

Emblematic of India and abundant throughout the region, the marigold or Tagetes patula is recognized for its protective and medicinal properties. Oeillets d’Inde or Roses d’Inde, as they are called in French, are woven into ritual garlands for weddings and ceremonies. In 1986, Dhaliwal used marigolds in a series of works on South-Asian arranged marriages.

Also included in Vision Exchange is a salt and marble installation. Dhaliwal previously used salt in installations as an esthetic choice, and for each iteration of this work, translucent salt crystals are essential. Composed of white marble (a material also found in the construction of the Taj Mahal), the cartographer’s mistake: untitled, 2012 depicts sculptures of a field hockey stick and ball, a cricket bat and ball, and a badminton racket and birdie resting on a bed of salt. These sports brought by the British are now wildly popular and today India dominates in all three—especially in cricket.

“I speak about my work in stories. I don’t always necessarily link it to history. I try to leave that to the curators or viewers,” says Dhaliwal. “Sometimes when people write about my art, they find connections I hadn’t thought of. When they saw my installation, some recalled that Ghandi led a protest to the sea, denouncing taxes on salt.”

In 1882, Britain implemented the Salt Act, which prohibited Indians from collecting or selling salt, a staple in their diet. Indian citizens were forced to buy the vital mineral from their British rulers, who, in addition to exercising a monopoly over the manufacture and sale of salt, also charged a heavy salt tax.

Defying the Salt Act and resisting British salt policies became the core and unifying theme of Mahatma Gandhi’s campaign of “satyagraha,” or mass civil disobedience. Gandhi reasoned that this would be a simple way for many Indians to resist British rule by breaking British law nonviolently.

The Salt March took place from March to April 1930. Thousands of Indians followed Gandhi from his religious retreat near Ahmedabad to the Arabian Sea, a distance of 240 miles. There, Gandhi had planned to collect crystalized salt from the salt flats at low tide. The police had crushed it into the mud, but Gandhi was able to collect a lump of salt, symbolically breaking British law. Nearly 60,000 people, including Gandhi, were arrested at the march. In this sense, the installation references the legacy and influence of British colonialism in India.

Dhaliwal’s representation of borders in the cartographer’s mistake has resonance in Canadian history as well. When the U.S.-Canada border was established on the 49th parallel, several First Nations found their communities divided on either side by European colonizers. Even regional borders within our country have not always honored the land’s Indigenous Peoples and the relationships they hold with their traditional territories. Vision Exchange explores the long-lasting impacts of colonialism in India and prompts us to reflect on the colonial history of Canada, while celebrating its growing diversity and rich multiculturalism.

You can hear from Dhaliwal first hand, along with a second visiting Vision Exchange artist, Jagdeep Raina, at the Members’ Preview guided tour on Thursday, May 9, 2019 at 2pm (exhibition opens at 1pm). Not a WAG member? Sign up here.

Join us for the public opening on Saturday, May 11 at 7pm.

Sarindar Dhaliwal (b. 1953, Punjab, India)
Sarindar Dhaliwal is a Toronto-based artist. She was born in the Punjab, raised in London, England and has lived in Canada since 1968. Dhaliwal received her BFA with a concentration in sculpture at University College Falmouth, UK, and her MFA from York University. She is currently enrolled in the Cultural Studies PhD program at Queens University. Dhaliwal has exhibited widely in Canada since the 1980s. A retrospective exhibition, entitled The Radcliffe Line and other Geographies, curated by Marcie Bronson (Rodman Hall, Brock University in St. Catherines) toured to The Reach in Abbotsford, BC and the Robert McLaughlin Gallery in Oshawa in 2015-16. More recently, she participated in the following group shows: Yonder (Koffler Gallery, Toronto 2016), Form Follows Fiction: Art and Artists in Toronto (Art Museum at the University of Toronto, 2016) and India Contemporary Photographic and New Media Art, FotoFest 2018 Biennial (Asia Society Texas Center, Houston, Texas).

Perspectives from India to Canada

John Paskievich is an iconic Winnipeg photographer and filmmaker. Born to Ukrainian parents in a displaced persons camp at the end of WWII, he grew...
COVID-19 Update