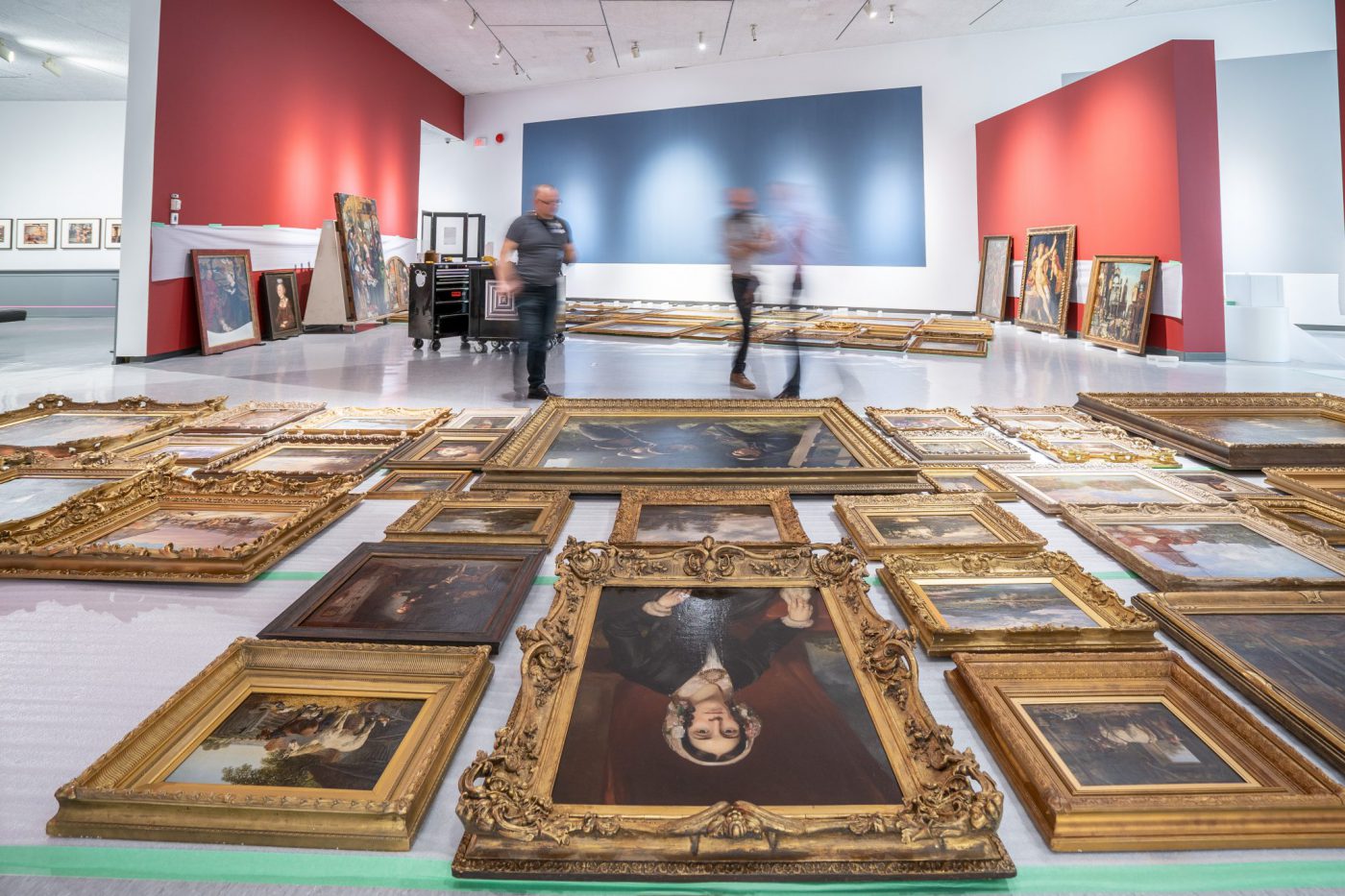 Imagine living at an English country house like Downton Abbey, or an ancient academy like Harry Potter’s Hogwarts. Paintings, accumulated over centuries, would be crammed on the towering walls and stairwells, their ornate frames nearly touching one another.

It’s a way of displaying art that can convey history, continuity, and legacy. It’s the opposite of today’s gallery norm of isolating works on plain walls. But a thoughtful grouping of many works, juxtaposing landscapes, portraits, still lifes, and more, can invite comparisons and spark renewed appreciation of old favourites like Group of Seven masterworks, says Andrew Kear, WAG Chief Curator and Curator of Canadian Art.

The wall-filling approach is known as a “salonstyle hang” in reference to the way artworks were displayed in salon exhibitions in Paris during the 17th to 19th centuries.

With some of the WAG’s galleries currently closed to accommodate the construction of the Inuit Art Centre, Salon Style: Reimagining the Collection showcases more than 150 of the greatest hits of the WAG painting collection in one breathtaking gallery. The artists range from the German Lucas Cranach and the French Eugène-Louis Boudin to Canadians Tom Thomson and Prudence Heward.

Dr. Stephen Borys, Director & CEO of the WAG, and Kear each curated two salon-style spaces, with Borys tackling the period 1500 to 1900 and Kear 1900 to the mid-1970s. Each plotted out the arrangements by moving paintings around on huge foam rectangles on the floor—a challenge that Kear likens to the video game Tetris.

Borys encourages you to notice influences between European and Canadian works. For instance, the style of an idyllic landscape by the French Jean-Baptiste-Camille Corot from 1855 is echoed in a pastoral scene from circa 1900 by the Canadian John Hammond.

Some works seem to speak to each other. Borys has positioned two of the WAG’s best-loved oil paintings of children, George Agnew Reid’s The Story (1890), depicting boys in a hayloft, and Sir John Everett Millais’ Afternoon Tea (The Gossips) (1889), portraying girls at a tea party, opposite each other on facing walls.

The curators had a friendly competition to see who pulled off the best salon-style hang. Borys hands the victory to Kear for a wall that creates stunning impact by combining nine large-scale paintings from the 1950s, ’60s and ’70s by renowned Canadians such as Jack Bush, Kenneth Lochhead, and Jean-Paul Riopelle.

“I love it,” Borys says. “It’s a completely abstracted wall, which is really cool.”

One response to “Salon Style”

In this exhibition spotlight video, WSO violinist, Karl Stobbe, discusses the history of the violin in relation to art and some of the pieces on...
COVID-19 Update