Tom Thomson and the Group of Seven

Formed in 1920 as a friendly gathering of like-minded artists at Toronto’s Arts and Letters Club, the Group is today a celebrated institution within Canadian art history. Their reputation was forged at a crucial time, during this country’s coming of age following World War I. The Group’s legacy was secured after they officially disbanded in 1933.

Although it is impossible to reduce the Group of Seven to a single origin, the figure of Tom Thomson looms large. Thomson died under mysterious circumstances three years before the Group formed, but not before introducing several of its future members to Algonquin Park. J.E.H. MacDonald, Lawren Harris, Franklin Carmichael, A.Y. Jackson, Frederick Varley, Arthur Lismer, and Frank Johnston went on to create wilderness landscape paintings at the provincial park and elsewhere that became symbols of a distinctly Canadian cultural identity.

The Group positioned itself as a new school of Canadian painting. As such, its members eventually sought inspiration and subject matter from across the country. They all sketched extensively throughout Ontario and Quebec, from Lake Superior’s northern shore to the Laurentian mountains; Lismer and Varley produced well-known canvases of the East and West coasts, respectively; many of Jackson’s paintings of the Alberta foothills are as dynamic as those depicting the rolling hills of Quebec’s Charlevoix region; and Harris achieved aesthetic perfection in his crystalline representations of pristine arctic environments.

Johnston left in 1924 and was soon replaced by A.J. Casson. Montreal’s Edwin Holgate became the Group’s “eighth” member in 1930, and Winnipeg’s L.L. FitzGerald was invited to join in 1932 following MacDonald’s sudden death. A year later, seeking to become more relevant to a greater number of younger artists, the Group disbanded and helped to found the Canadian Group of Painters, whose original 28 members were drawn from across the country. 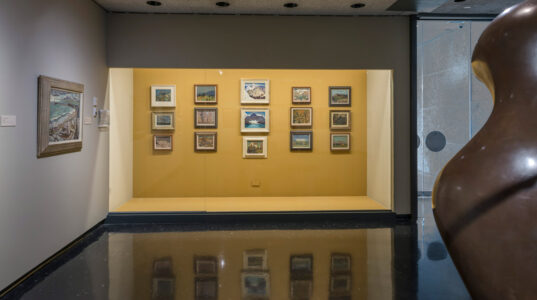 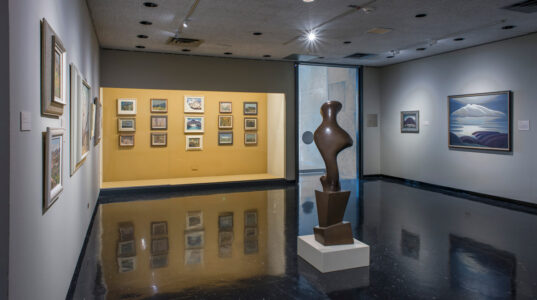 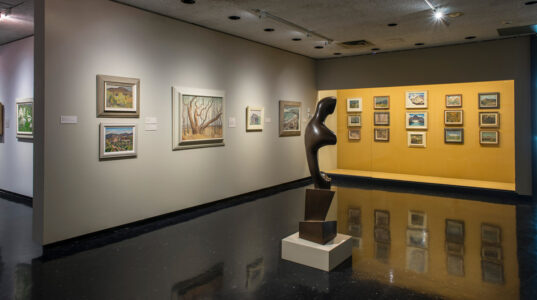 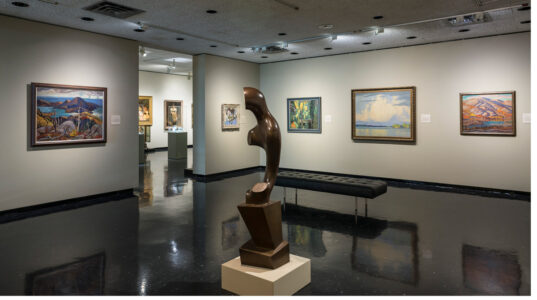 The first impressions of the enormous works in Wanda Koop’s View from Here are starkness and intensity. The evocative paintings feature prominent landscapes composed within the bald outline of a face, erasing the comfortable familiarity we have with both landscape and portrait.

Visitors to WAG-Qaumajuq can experience art before coming inside! Check out the sculptures outside Qaumajuq and the WAG – see works by Goota Ashoona, Abraham Anghik Ruben, and Ivan Eyre, all for free!