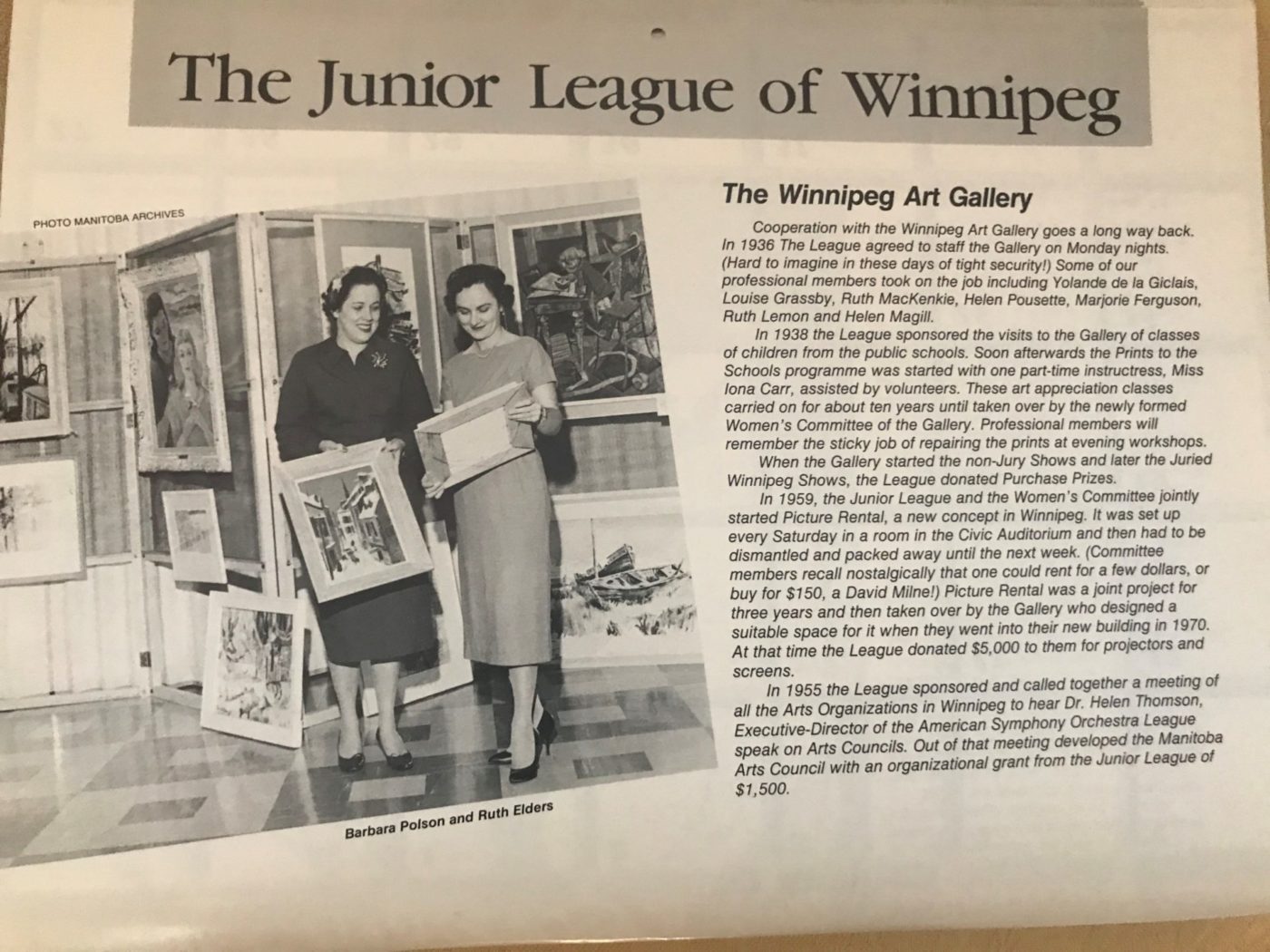 We’re seeing some pretty amazing stories come in from individuals and groups who are supporting the WAG Inuit Art Centre through the Visible Vault Campaign. Connected to the WAG since the early days of the Gallery, the Junior League of Winnipeg (now a Legacy Fund at the Winnipeg Foundation) has contributed by purchasing a shelf dedicated to the many JLW volunteers who have spent countless hours supporting the WAG.

In anticipation of the Centre opening in late fall 2020, the Visible Vault Campaign invites community members to donate $2,020 to add a name to the Visible Vault, helping to build Canada’s Inuit Art Centre. When you enter the WAG Inuit Art Centre, you will be met by a three-story glass vault showcasing thousands of carvings from the world’s largest public collection of contemporary Inuit art.

A Brief History of the Junior League of Winnipeg

The Junior League of Winnipeg (JLW) was the WAG’s original volunteer corps and later set up the Women’s Committee, which has today become the Associates of the WAG. Many JLW members are still involved as Associates and Board of Directors Committee members at the WAG. The JLW has been nominated for a Nellie McClung Foundation 150 Trailblazer Award, and its journey of volunteerism, advocacy, and leadership holds wisdom to inspire us all.

The JLW began in 1928 with 56 members. Today, its legacy still resonates in the community by continuing to fund community groups through the Junior League of Winnipeg Legacy Fund at the Winnipeg Foundation. The JLW surveyed the needs of the community and determined that a skilled volunteer group could make a difference.

Members of the JLW were instructed in organizational skills, parliamentary procedures and meeting protocols to have a knowledge of leadership skills to help build organizations and assist community groups. At one time there were 100 members serving on boards of 100 community groups. The League was then able to partner with a wide array of community organizations; Leaguers became volunteers to assist in the work of the organization and provided support funds for its projects and functioning.

The JLW’s aim of providing efficient volunteer service became essential in wartime, and along with the impetus of the National Registration of Canadian Women, the Central Volunteer Bureau of Winnipeg was established in 1939 and is active today as Volunteer Manitoba. At times the JLW tallied its volunteer hours and as early as 1930 the members had volunteered 8,800 hours.

Throughout the years the work of the League focused on the following:

In order to support so many initiatives experienced members worked on fundraisers in addition to giving. The major source of funds to the JLW was the Thrift Shop that opened in 1930 and not only served the community’s needs but provided necessary funding to develop and sustain community organizations until 1995. Among the many fundraisers the JLW undertook, the largest was the Festival of Trees and Lights that gave great pleasure to children and families. These fundraisers allowed all of the JLW-supported programs such as art classes, plays, puppet shows, etc. to be free for the community.

Development and Sustenance of the Arts

By the beginning of the 20th century, public interest in an art museum for Winnipeg grew. The Winnipeg Art Gallery was established in 1912 and by 1939 it was housed where the Archives of Manitoba is now located, and League members began an educational program leading children through the displays.

Many activities were coordinated at the WAG such as The Picture Rental Project, which was established with the Women’s Committee. In 1936 Leaguers staffed the Gallery on Monday nights.

In 1955, the League sponsored and called together a meeting of all the arts organizations in Winnipeg. Out of that meeting developed the Manitoba Arts Council with an organizational grant from the Junior League of Winnipeg Educational Opportunities in the Community.

JLW has created valuable opportunities for members and the community at large to learn and grow. League efforts have gone into the development of internal mentoring and leadership training as well as providing support to community-wide educational efforts.

The power of women’s voices, hands, and minds are evident in the enduring legacy of the JLW. When they began they had no idea what their contribution would change in the future. They began at a troublesome time in history and went on to train volunteers to serve other charities and organizations. They recognized the needs in a community, did thorough research to confirm findings, and then volunteered millions of hours and provided over $2 million to local organizations.

More than just delivering service to the community, League members provided an opportunity for women to reach inside and discover their potential. The JLW was a leadership force dedicated to building a civil society by embracing diverse perspectives, creating partnerships and inspiring shared solutions. The Junior League of Winnipeg Legacy Fund continues to donate to organizations and programs that fulfill the values of the organization.

Although the JLW is not currently active, living members meet annually. Past presidents include the following women (see a full list here):

We hope you’ve enjoyed this brief history of the JLW and the commitment and dedication of its members to make a difference in numerous areas of our community. True trailblazers, they took on an advocacy role for others and make life better for so many, promoting the concept of volunteerism to assist charities and organizations to benefit the greater community, and providing hours of volunteer assistance along with supporting funds.

You too can contribute to the WAG Inuit Art Centre Visible Vault Campaign in the name of your group or organization. This is a unique opportunity to be part of the community of supporters who are coming together to build Canada’s Inuit Art Centre.

* The vault will display artwork currently in the WAG collection, which includes pieces on loan and in the permanent collection. Each shelf may contain multiple carvings, and those works will rotate.

** Please note, names of those who purchase shelves will be available on an electronic screen near the vault. Names will not be visible on the vault itself.

The WAG is a haven for looking, seeing, and learning through the visual arts. It is also a catalyst for stimulating and enduring friendships. It...

It’s not generosity, it’s a requirement of life

Giving back comes naturally for Raymond and Charlene Curry. This inspiring couple provides loyal support to the WAG and contributes to the community in many...

Calling all Inuit filmmakers, videographers, and photographers! The WAG Inuit Art Centre is accepting topic submissions for 3-5 min. videos that: •  Feature stories about...

Moving Art into the Visible Vault

The world’s largest public collection of contemporary Inuit art will soon be accessible for all to see in the new Visible Vault at Qaumajuq, the...

Gateway to the North

Read this blog in Inuktitut below The WAG is home to the largest public collection of contemporary Inuit art in the world, with close to...
COVID-19 Update