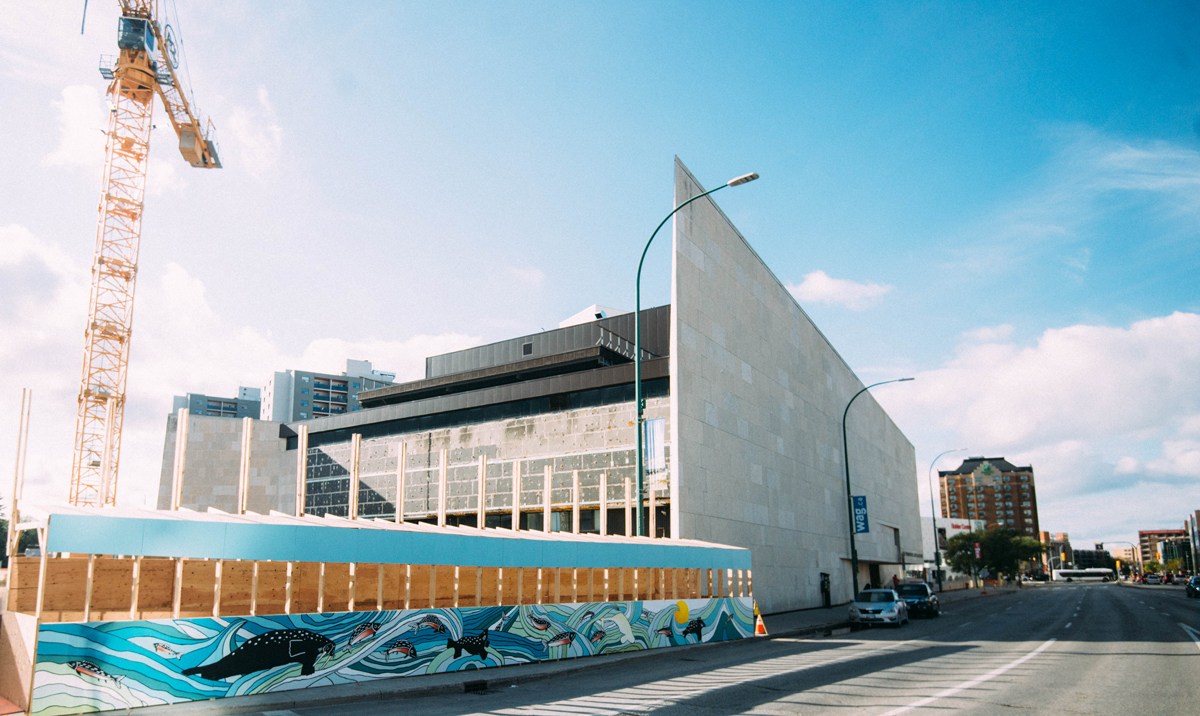 As a young artist of Inuit heritage, Kailey Sheppard was surprised and moved by last spring’s WAG exhibition, INSURGENCE/RESURGENCE, and its representation of current Inuit and other Indigenous art.

“It meant a lot to me because there’s not a lot of accurate representation of Inuit out there. The only time you ever hear about Inuit is things like ‘Eskimos living in igloos’,” says Sheppard.

It made me want to get involved with the Inuit Art Centre in some way.”

In a wonderful bit of serendipity, Sheppard reached out to the WAG’s Curator of Inuit Art, Darlene Coward Wight just as Wight was seeking the right art project for the covered pedestrian walkway in front of the WAG Inuit Art Centre’s construction site.

“We knew we wanted artwork that reflected the spirit and mission of the WAG Inuit Art Centre,” explains the curator. “I thought of Kailey,” because of the WAG’s commitment to mentoring and supporting emerging artists, adding “she’s self-taught, she’s of Inuit heritage, and she’s never had her artwork displayed publicly, so it seemed like a really good opportunity.”

To produce Sheppard’s large-scale artwork, Mosaic Sea, the WAG worked with Graffiti Art Programming (GAP), who provided workspace and a group of young artists to help paint the mural depicting ocean creatures of the North.

Pat Lazo, GAP’s Artistic Director recalls, “It was perfect timing because Synonym Art Consultation was about to launch the 2018 Wall-to-Wall Mural + Culture Festival and we were working with them to identify a good mural project for the front of Resource Assistance for Youth (RaY) at 125 Sherbrook Street.”

With support from RaY and the West Broadway BIZ, Sheppard worked with Synonym and GAP to produce a mural for the street-level agency featuring a scene from her WAG Inuit Art Centre mural.

Lazo says, “It’s cool that a part of Kailey’s WAG artwork is replicated on RaY’s mural, which will be permanent,” adding, “This is the first time the Wall-to-Wall Festival has presented work by an Inuit artist.”

When asked what impact she hopes Mosaic Sea will have on viewers, Sheppard says, “I hope people find it fun and interesting to see sea animals here in the middle of the Prairies.”

On view at the WAG until spring 2020, and curated by Jaimie Isaac and Jocelyn Piirainen, the exhibition subsist explores perspectives on the environment, globalization...

DID YOU KNOW…the WAG oversaw and installed artwork at the newly opened Iqaluit International Airport? The grand opening ribbon was cut September 13 exhibiting over...