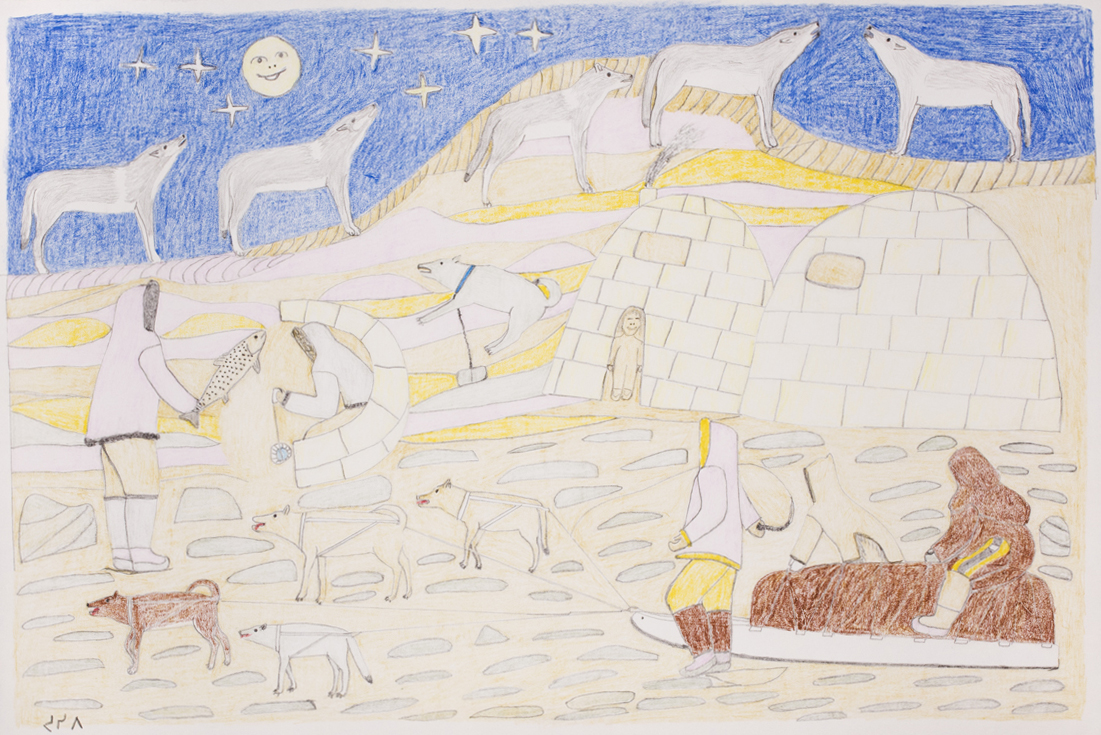 Born in the Back River area north of Baker Lake, Nunavut, artist Mary Yuusipik Singaqti (1936-2017) became well known for her wall-hangings and carvings. But WAG Curator of Inuit Art, Dr. Darlene Coward Wight, was “blown away” to discover a collection of her coloured-pencil drawings. You can see some of these pieces in the new exhibition, Mary Yuusipik Singaqti: Back River Memories.

“In December 2014 I visited Yuusipik in her Baker Lake home to hear and record the stories she depicts in her artworks,” recalls Wight. “They are panoramas filled with details from the life of her inland Utkuhiksalingmiut Inuit, in the most remote region of the Canadian Arctic. Yuusipik explained each drawing in detail and revealed a life of both happiness and extreme hardship.” Her stories are in the exhibition and in the accompanying catalogue, now available at Shop WAG.

Mary Yuusipik Singaqti: Back River Memories is the first solo exhibition of the artist and features 26 of the drawings recently purchased by the WAG, as well as striking wall hangings and sculptures.

Yuusipik belonged to the last generation of Inuit to experience the inland nomadic way of life that centred on fishing and hunting caribou. Her artistic motivation was to show her life, “I want the younger generation to know about me, how we used to live [and] how life was before.” 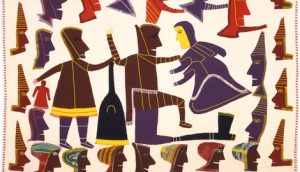 A second exhibit on now at the WAG, Nivinngajuliaat from Baker Lake, celebrates one community’s mastery of a medium with wall hangings dating from the 1970s to the 1990s. Established as a permanent settlement in the 1950s, Baker Lake is situated at Canada’s geographical centre and has become known internationally for this unique fabric art form. Nivinngajuliaat is the Inuktitut work for “wall hanging.” The exhibition brings together work by nine artists, including Yuusipik’s acclaimed mother, Jessie Uunaq (Oonark), and is guest curated by Krista Ulujuk Zawadski, Curator of Inuit Art for the Government of Nunavut Fine Art Collections.

“With Baker Lake’s long history of art production,” says Zawadski, “it is refreshing to see these works pulled from the vaults so that we may admire the intricate skills of the artists and perhaps be drawn into the stories the artist tells in each piece.”

Nivinngajuliaat from Baker Lake is largely made up of works from the Government of Nunavut Fine Art Collection, on long-term loan to the WAG, with a selection from the Gallery’s holdings. Along with Oonark, featured artists include Dr. Irene Avaalaaqiaq Tiktaalaaq, Naomi Ityi, Victoria Mamnguqsualuk Kayuryuk, Miriam Qiyuk, Jimmy Taipanak, Winnie Tatya, and Marion Tuu’luuq.

Save the date for some upcoming programming (free with Gallery admission):

A conversation with Jocelyn Piirainen on Carved in Stone: Sanannguaqtit ᓴᓇᓐᖑᐊᖅᑎᑦ

by Laura Friesen Carved in Stone: Sanannguaqtit ᓴᓇᓐᖑᐊᖅᑎᑦ, a new film profiling several Inuit artists whose works are part of the Winnipeg Art Gallery’s collection,...
COVID-19 Update
Due to the pandemic, WAG-Qaumajuq is closed until August 7, 2021. ShopWAG is now open for in-person shopping. Learn more
The Winnipeg Art Gallery is located on Treaty No. 1 the original lands and waters of Anishinaabe, Ininiwak, Anishininiwak, Dakota, and Dene peoples, and on the homeland of the Métis Nation.