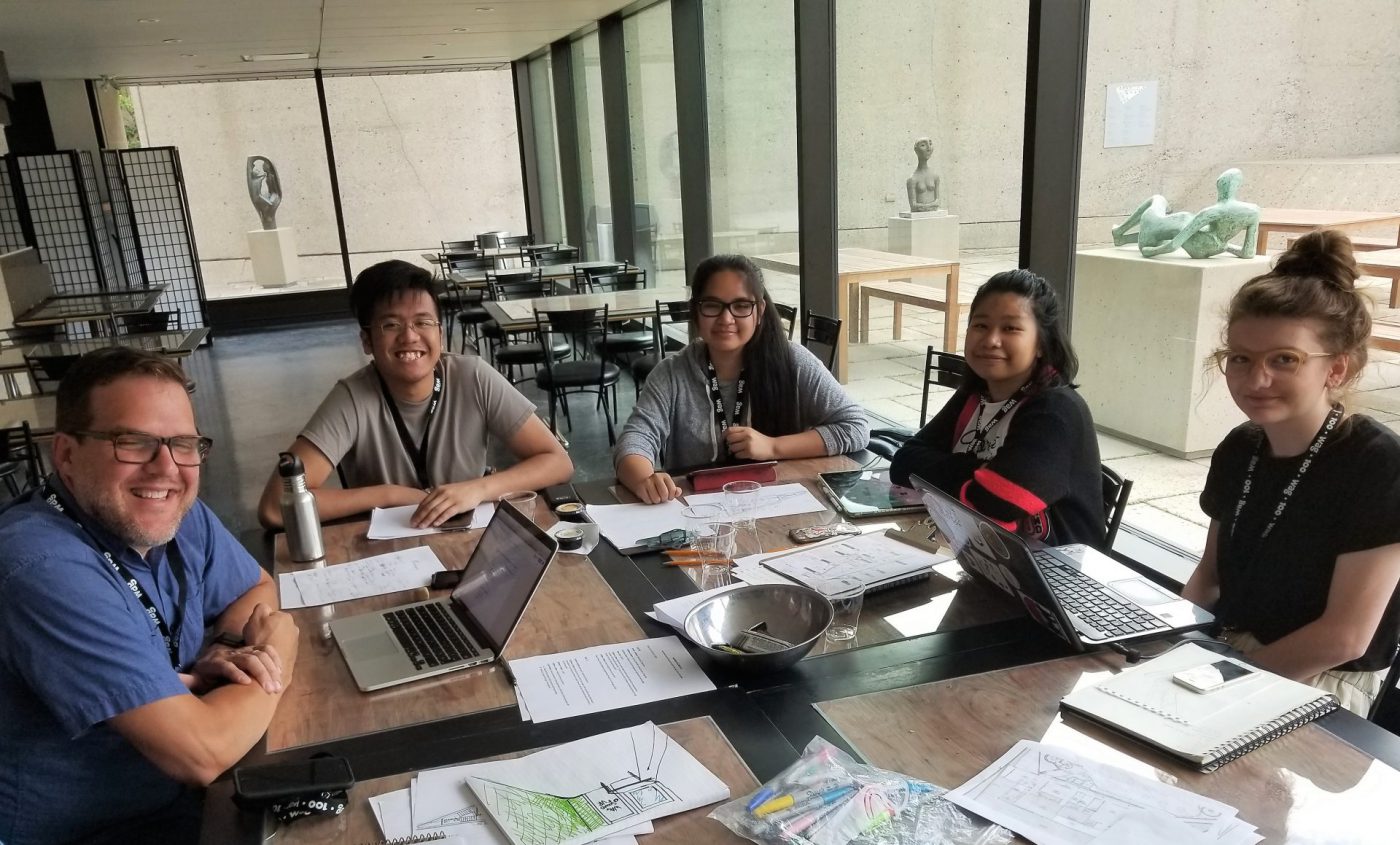 A dynamic collaboration was born last year when the WAG’s Education Department attended a presentation by Sisler High School’s Interactive Digital Media program. The timing was excellent, as the Inuit Art Centre project team was about to begin designing a Digital Media Studio as part of a new suite of art-making studios and education program spaces being created on the WAG’s Penthouse level.

To the WAG’s Head of Education, Rachel Baerg, the Sisler presentation revealed a fantastic engagement and partnership opportunity. She invited Jamie Leduc, Sisler’s Department Head of Business Ed, Information Technology & Interactive Digital Media and four talented students to bring their expertise and ideas to a brainstorming session on designing the new studio.

“We gave the students the dimensions of the new studio space and asked them to ‘dream’ their ideal studio,” notes Rachel Baerg.

The results were more exciting than anyone anticipated.

Mr. Leduc and the students (Joshua Pagtalunan, Luisa Marie Roscuata, Jenna Whitman, and Czarina Ramos) didn’t just come up with their vision for the new studio; they also developed a 3D rendering of the space, made recommendations for equipment, prepared a budget and offered ideas for programming such as film production, video editing, animation, and creating art using non-traditional tools.

Mr. Leduc noted, “I applaud the WAG for their forward-thinking approach by empowering Winnipeg youth – giving them a voice in what the studio will look like and what programs may run there. This studio will encourage a whole new generation to explore and create art. Creativity will flourish at the WAG’s new media studio.”

Rachel adds, “With this leading-edge studio, we’ll be able to bring in some of the younger Northern artists who are creating exciting works in 3D printing and stop-motion animation and have them share their talent and creativity with artists and students here in Winnipeg”.

She hopes some of the students will bring their talents back to Winnipeg after completing their schooling, noting, “The students were, and still are, an amazing resource. There’s a good chance we’ll be hiring some of them – perhaps as the first digital media instructors in this new WAG Studio!”

“The collaborative experience we had with the Winnipeg Art Gallery was fantastic. The new studio will be a great platform for all youth from our community [as] a safe space to create, collaborate and express one’s voice through cutting-edge media.”
– Joshua Rafeal Pagtalunan, student

The Vancouver Film School (VFS) recently named Sisler as the best Canadian Interactive Digital Media (IDM) High School Program of 2017.Dr. Ted Gervan, VP of Education at the VFS says, “The educators and IDM program framework at Sisler are in a league of their own—it is perhaps the top IDM program in Canada. Sisler consistently produces some of our country’s brightest young talent.”

On every floor of the WAG, you can experience a wide range of Inuit art. Carvings, drawings, wall hangings, and multimedia projects created recently, and...

Housed on the Penthouse Level of the Gallery, the new WAG Studio is designed by Qaumajuq architect Michael Maltzan. The larger and more versatile spaces...
COVID-19 Update