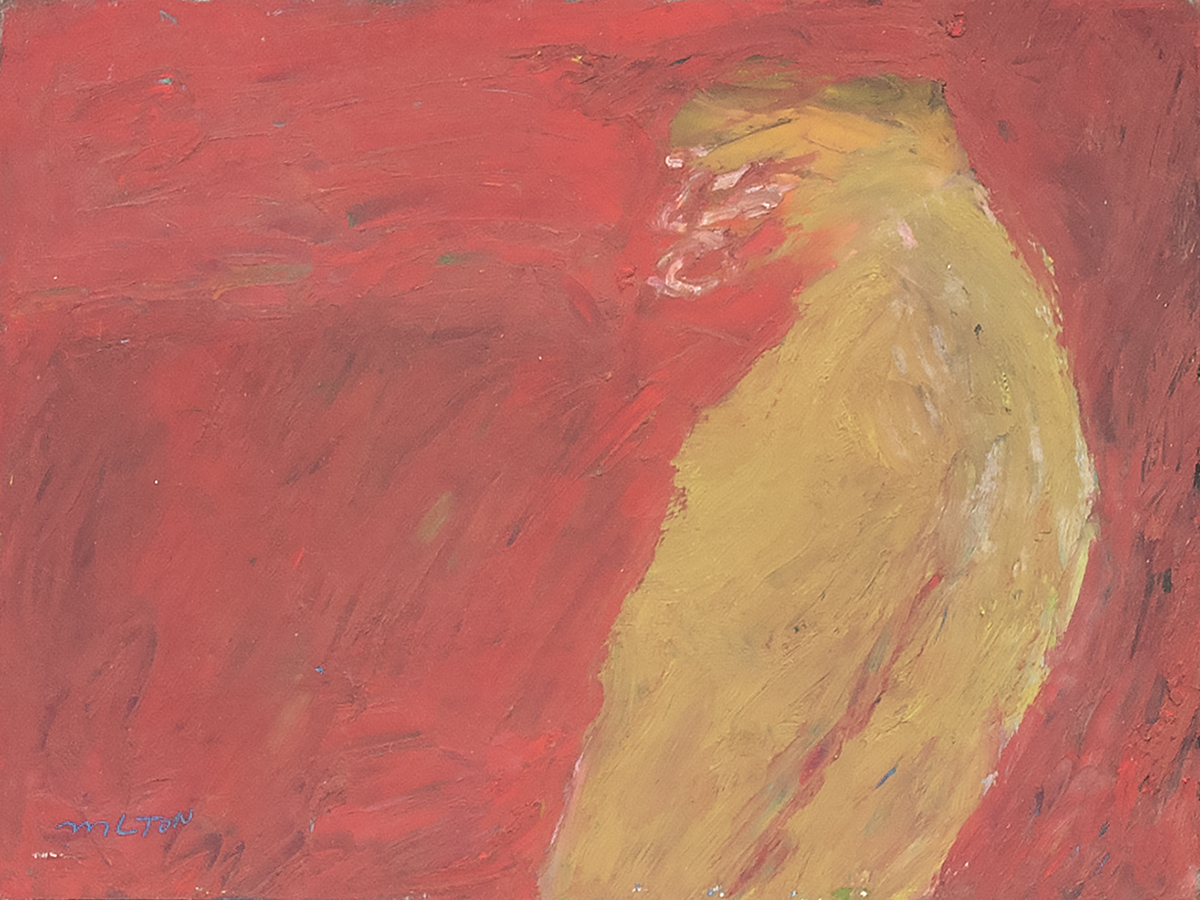 This small painting carries big energy. The striking, intense colour and strong, urgent brushstrokes seem to animate the image beyond the edges of the paper. The artist is Jamaican painter Milton George who was best known as a visual storyteller.

His sources ranged from politics, male/female relationships, religion, the self, and others whom he may have encountered while on his daily journey’s through Kingston.

The precise subject matter of Crouching Man is something of a mystery. Who is the figure in this painting? Is it a self-portrait? Is it someone from the artist’s life? Is it an altogether imagined subject? Or maybe a simple figure study? Certainly it carries a typically masculine character – broad shoulders, thin waist, thick arms, toned chest, perhaps even the suggestion of a buzz-cut at the top of the head. The facial expression is both tricky to decipher in detail, yet somehow still sinister, disquieting, perhaps even furious!

George’s unnatural mix of golden yellows, limey greens, and small hints of blues in the flesh tone of this man is very similar to that employed by Die Brücke artist Ernst Ludwig Kirchner in his infamous series of bathing nudes during the first two decades of the twentieth century. Indeed, George was influenced by the German Expressionists’ emphasis on the artist’s inner psyche, and preference for gestural mark-making, distorted forms, and bright colours over any precise replication of reality.

– Riva Symko, Head of Collections and Exhibitions and Curator of Canadian Art

Milton George was born in Manchester, Jamaica in 1939 but lived in Kingston and Braeton, Jamaica for most of his life. George’s work has been widely exhibited in Jamaica and abroad, among others in Jamaican Art 1922-1982 (1983-86), which toured in the USA, Caribbean Art Now (1987), and New World Imagery (1995), which were shown in England, and has represented Jamaica in the Havana and Santo Domingo biennials. His awards include the Silver Musgrave Medal in 1987 and a gold medal at the 1994 Santo Domingo Biennial. His work is represented in major local and regional collections, such as the National Gallery of Jamaica, and the private collections of Wallace Campbell, David Boxer, Guy McIntosh and Herman van Asbroeck in Jamaica, and Mervyn Awon in Barbados.

One response to “New WAG Acquisition”

Due to construction and opening of Qaumajuq – the Inuit art centre, the WAG instituted an acquisitions slowdown for 2020-21, both for artwork donations and...
COVID-19 Update