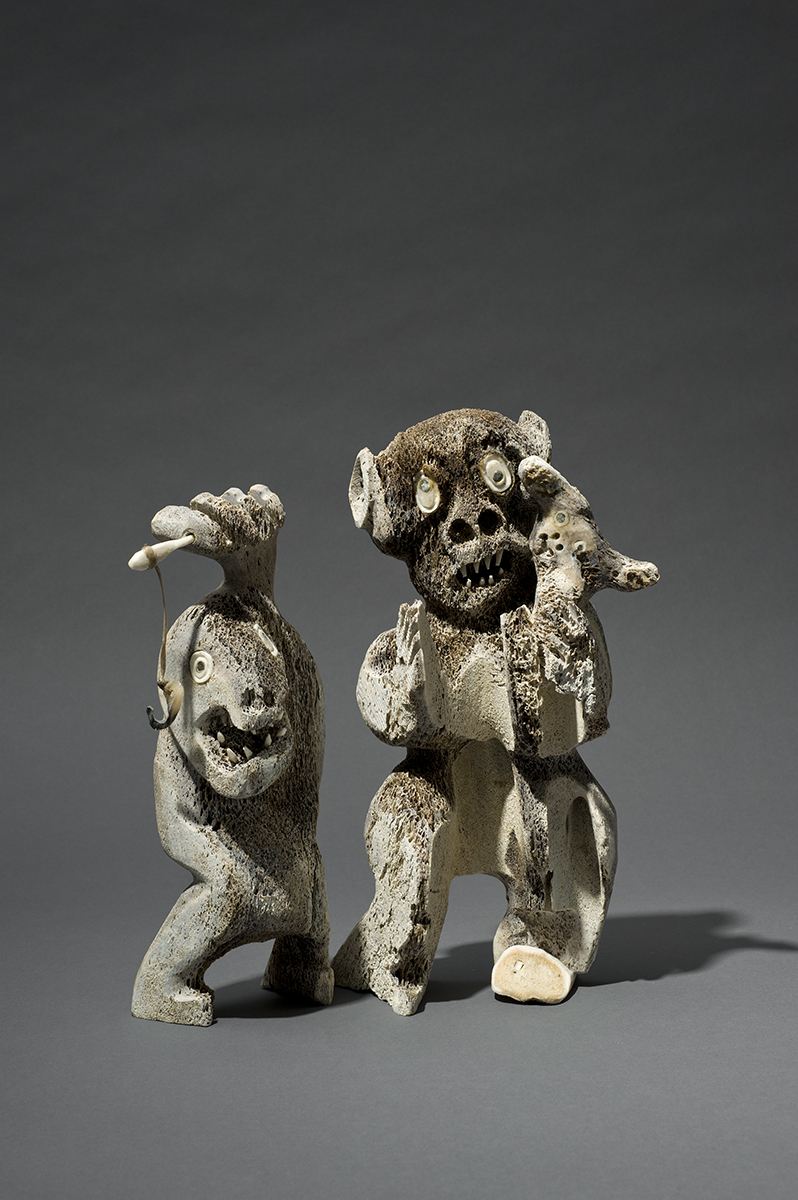 At the time, I was working with Canadian Arctic Producers (CAP), the central marketing agency for Arctic Co-operatives Ltd., and learned that Ullulaq had just moved from Taloyoak that year. He had been one of a small group of people in Taloyoak (then Spence Bay) that began making carvings from ancient whalebone in the late-1960s. My trip was to learn more about the wildly original bone and stone sculptures that had been arriving in the CAP warehouse in Ottawa. Many of these were by Ullulaq and I was eager to encourage his work.

I returned to the Nattilingmiut communities of Gjoa Haven, Taloyoak, and Kugaaruk several times in the following years and organized a number of commercial exhibitions. My interest in the art of the region continued after taking up my position as Curator of Inuit Art at the Winnipeg Art Gallery in 1986, and I made another trip in May of the following year. I found that artists were having difficulties obtaining carving materials. I had asked Ullulaq to create a whale bone sculpture for the WAG, but he sadly explained that he had no bone. However, word went out in the community and he excitedly returned to tell me that a hunter had just returned with a large piece of bone. We agreed that I would pay for the bone in exchange for the carving he would create. I took a photograph of him with the bone tied to his komatik. He was so excited to have the bone that he roared off home, forgetting that he was to take me back to the co-op hotel. It was a long walk back! 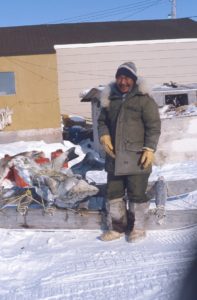 By the mid-1990s, I had plunged into research for a major exhibition of the art of the region—Art and Expression of the Netsilik (1997). This included another trip in 1996 to interview the artists and collect their stories of artworks selected for the exhibition. Shortly after returning back to Winnipeg, I received a carving from the Gjoa Haven co-op that has become one of my favourite pieces by Ullulaq. Joseph Suqslak, Ullulaq’s nephew, had worked with me when I was in Gjoa Haven, and again helped me receive the story behind the carving from his uncle.

I learned that the two creatures he depicted were Amayuqyuq and Qallupilluq, well-known and dangerous female entities in the oral culture of the Nattilingmiut. “Amayuqyuq” means “kidnapper of little children.” This story about a fearsome female abductor was told to children to keep them from wandering too far from their camp and getting into danger with wild animals, or from getting lost. Amayuqyuq is the figure on the right who clutches a terrified child.

The figure on the left holding a fish hook is Qallupilluq who repeatedly makes a “Qallupilluq” sound. As she was believed to snatch and abduct tasty children at the seashore, this story was told to keep them from going to a dangerous area. It deterred them from venturing near the floe edge where they might jump onto dangerous ice floes which could break and drift away. Ullulaq has shown these two fierce creatures together for dramatic impact.

Ullulaq explained that he took readily to carving in 1961 because he always enjoyed making craft items. He recalled joining the women while they did their sewing when he was still a boy living in an iglu. He particularly enjoyed sewing dolls and this interest in the human figure continued into his sculpture. His art is very much concerned with human activity and emotions. Expressive eyes and mouths register a wide range of emotions and even his animals have human-like personalities. He was a true pleasure to know, always cheerful, optimistic, considerate and generous. He loved to laugh, and his sculptures often seem to reflect the wide smile for which he was known. He gained many friends when he came to the opening of Art and Expression of the Netsilik in December 1997.

Ullulaq prided himself on his fine detailing and his originality. In 1983, he told me that the most important thing for him was to be original, and Amayuqyuq and Qallupilluq is a great example of this goal. He did not want to copy the style and subjects of other carvers, and made a conscious effort to make each piece different. This was a tremendous challenge given the huge body of work he was to create over the years, but he drew on his extensive knowledge of stories to create a wide diversity of subjects while maintaining a high degree of workmanship.

Education through the voices of art is a cornerstone of the WAG’s mission, and there is a new space dedicated to it in the WAG...

Michael Maltzan’s feelings about architecture haven’t changed much since he first dreamed of becoming an architect at age 12. Now internationally renowned, Maltzan says, “What...

Face to Face with Inuit Art

“Cool!” This is the response of a student on an Inuit art tour when they see the Kakivak, a fishing spear made from Caribou antler...

Heather Igloliorte, lead curator for INUA, recalls when she was invited by the Winnipeg Art Gallery to be a curator for the Inuit Art Centre’s...
COVID-19 Update