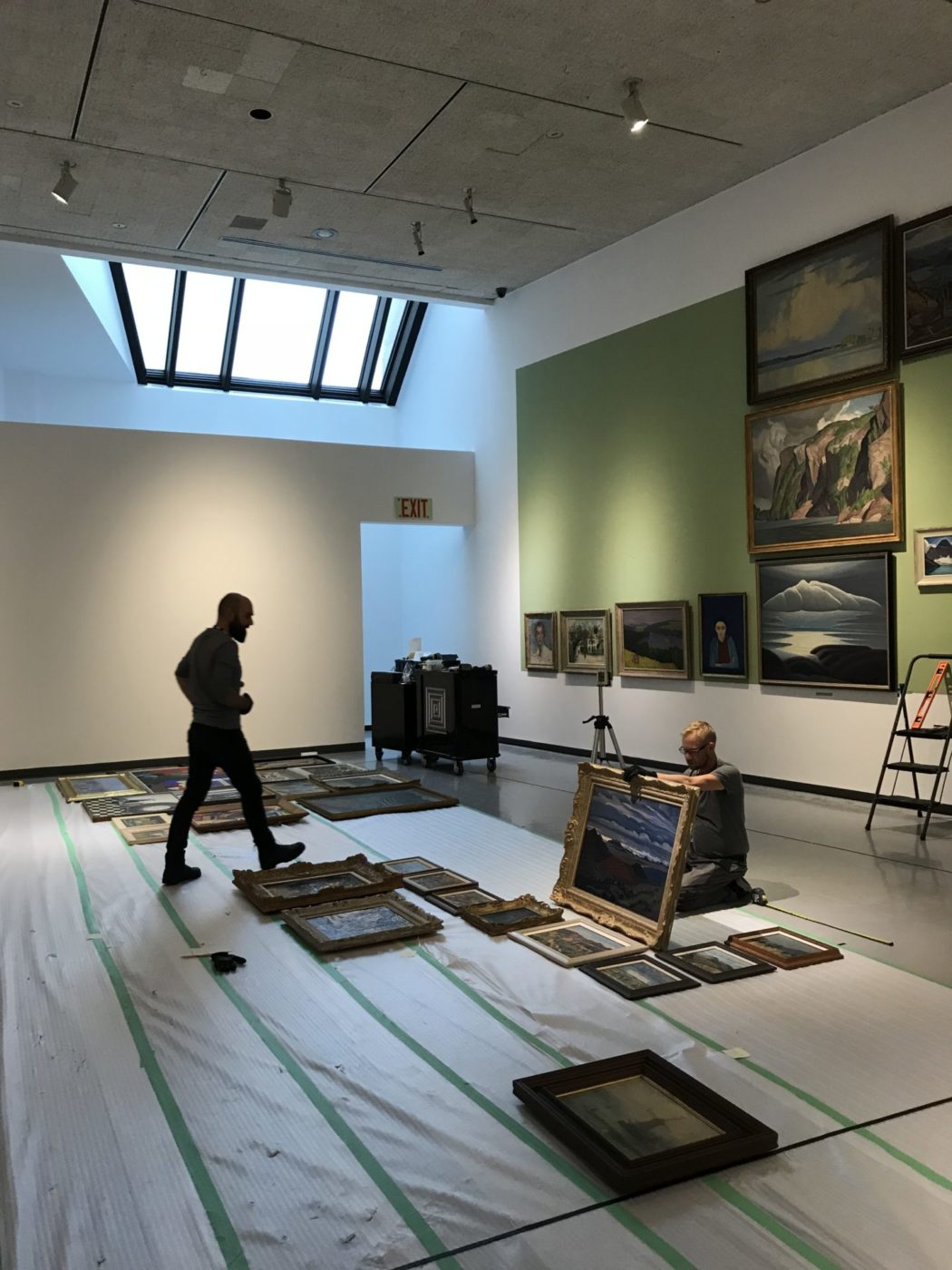 Get to know the WAG’s Museum Services Preparator team, responsible for setting up exhibition spaces and maintaining the collection!

We chatted with preparator, artist, and Blinkers Art & Project Space co-founder, Kristina Banera, who has been with the WAG for four years. Go behind-the-scenes at the WAG and learn about the work that goes into opening an exhibition.

Q: What does an art preparator do?

A: As art preparators at the WAG we are responsible for building the physical aspects of an exhibition including walls, painting, the installation of artwork, art handling, lighting, crating and shipping artwork, and day-to-day maintenance of the exhibitions – including making sure they run properly while they are open to the public.

A typical day can really vary for us, hardly no days are the same in terms of tasks being done, which keeps it interesting. Daily scheduling mainly depends on the exhibition schedule. Usually we will have two to three shows consecutively coming to a close one after another so during that time we move from installing one new show in the first space, directly on to the next. That cycle can take months depending on the exhibitions we are working on – sometimes less.

During our “down time” we are usually busy crating artworks that are being sent out on loan, cleaning after weeks of heavy install, or prepping components for upcoming exhibitions. We also install artwork at WAG@The Park in the Assiniboine Park Conservancy, where exhibitions regularly change as well.

Sometimes we need to travel for our job, for example if a particular work of art has very specific installation notes, we may travel to wherever it is being installed at another Gallery. I had the pleasure of going on a research trip in 2019 to Toronto to see Vision Exchange: Perspectives from India to Canada before it came to the WAG. The installation was complicated and we wanted to be as prepared as we possibly could be for when it came time to install the works at the WAG. On top of that, we are lucky enough to get to fly to Iqaluit to rotate artworks at the airport every six months or so, for Nunavimmiut to connect with the Government of Nunavut’s Fine Arts Collection, held on long-term loan at the WAG

Q: How long does it usually take to install an exhibition?

A: The amount of time it takes to install an exhibition varies quite a bit depending on the scale of the show, the kind of work, and various building requirements. At the WAG, our small team does everything from demolishing and re-building walls, plinths, sometimes even constructing part of the artworks – depending on the artist, vision, and requirements of the work. We paint the exhibition spaces ourselves, which can take anywhere from a few days to a few weeks, install all of the lighting, and the artworks themselves. For  large-scale shows such as the Picasso in Canada exhibition, INSURGENCE/RESURGENCE, Vision Exchange, or Kent Monkman’s Shame and Prejudice, it typically takes about a month of hands-on work in the galleries.

Prior to the actual take-down of a closed show before the next one is installed, we try to prepare as much as we can ahead of time. Sometimes there will be a certain number of plinths that we know will be required for sculptural works, etc. We are currently already preparing for Kwaata-nihtaawakihk — A Hard Birth, which is coming up this year at the WAG. If work is coming to the WAG from a lender or artist, we start planning to receive the works into the building well in advance to have the work condition reported and ready for framing if it is required.

On average it takes between two to four weeks to install but as you can probably guess, that can vary.

Q: What was your favourite exhibition to work on and why?

A: That’s a really hard question! Since I’ve been at the WAG I’ve had the opportunity to work on so many good exhibitions. I am always a fan of the exhibitions that Jaimie Isaac and Jocelyn Piirainen curate.

Kent Monkman’s exhibition, Shame and Prejudice was a big one for sure. Being a fan of his work, it makes it all the more special getting to work with the art one-on-one. We had the pleasure of working with Nick Pittman who works at the Kent Monkman Studio in Toronto and who played a large role in actually constructing the three-dimensional pieces. It was very cool to hear about the process of making the work, as many of us at the WAG are artists. Working with the mannequins was a big highlight for me personally. The whole show was amazing and it’s hard to pick out one thing that was most memorable from the install.

Small Worlds: Inuit Miniature Carving is another one of my favourites that I’ve been lucky enough to work on. The small Inuit carvings are so beautiful (and terrifying to handle). Jocelyn’s colour schemes are very exciting to hear about and are always well considered with the exhibitions she has curated so far at the WAG.

Vision Exchange and INSURGENCE/RESURGENCE have been some of my favourites as well, all of the works in both exhibitions were truly amazing.

Q: How did you become a preparator?

A: I became a preparator shortly after graduating from the School of Art at the University of Manitoba. It happened pretty organically as I was installing art shows that my colleagues, friends, and myself were involved in. As an emerging artist, you typically are required to install your own exhibitions, so I developed a lot of skills by simply doing the work. My father was a “fixer-upper”, so I grew up being around tools and using them for nearly my whole life. While in school I made many large-scale sculptures that forced me to learn how to use different equipment and experiment. I think all of that experience made me comfortable working in this kind of position.

3 responses to “Meet the Prep Team”

Introduction to Activity: Lionel LeMoine FitzGerald is one of Winnipeg’s most celebrated artists.  FitzGerald is said to have been a shy and introverted individual.  Some...

The exhibit is reclaiming space for a community often shut out of the art world. Over the past month, CBC Arts and CBC Indigenous have collaborated to bring you stories — and...

The British painter John Everett Millais (1829-1896) gave his painting “Afternoon Tea” in the WAG collection the subtitle “The Gossips”. Perhaps it was because he...
COVID-19 Update