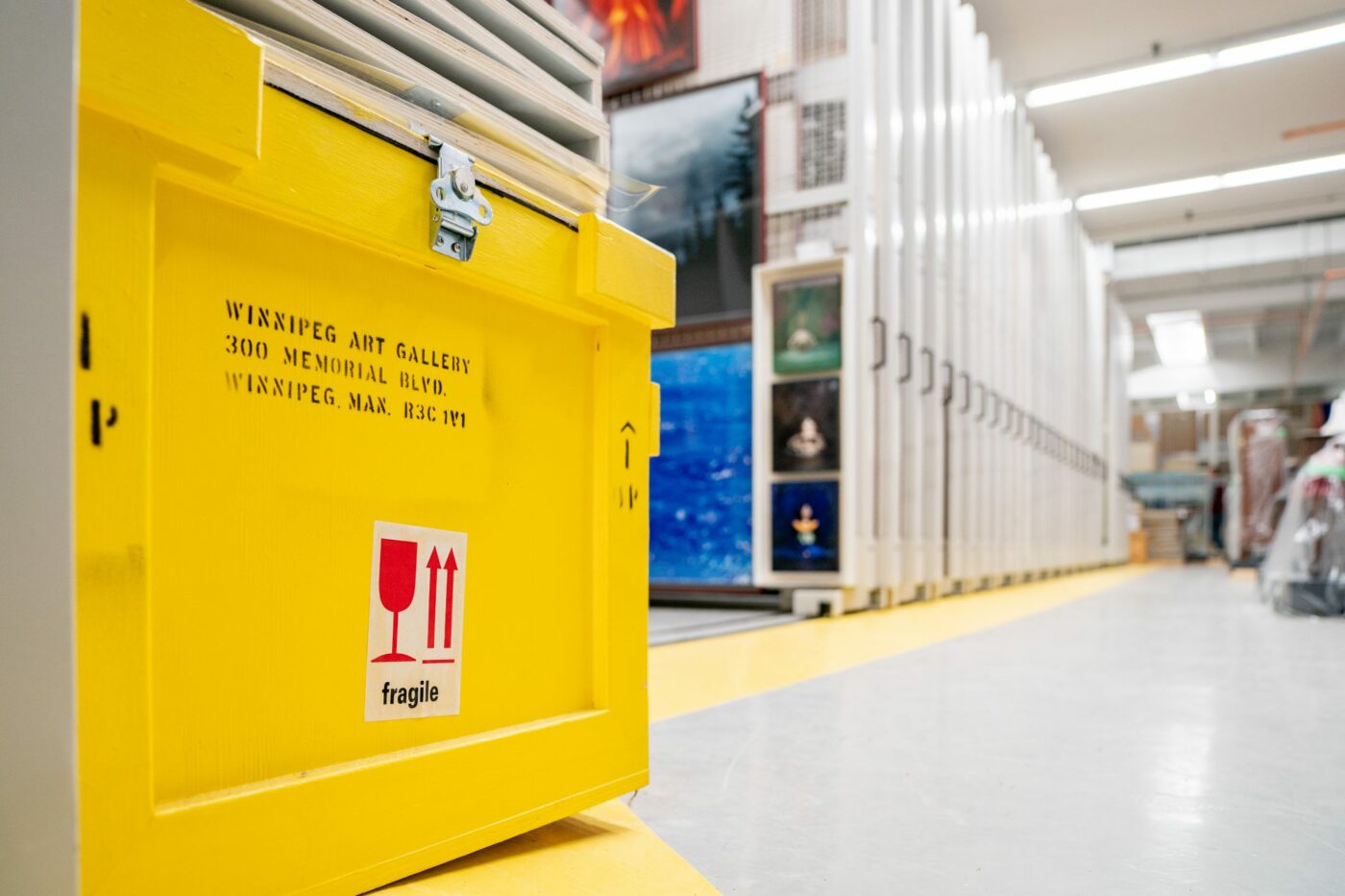 Due to construction and opening of Qaumajuq – the Inuit art centre, the WAG instituted an acquisitions slowdown for 2020-21, both for artwork donations and purchases. With this in place, the Gallery was still able to welcome some exciting new artworks to the WAG-Qaumajuq collection, your collection!

A bequest from Dr. Gerd Asche offered a unique Frances Anne Hopkins artwork to the Gallery. Titled Canadian Voyageurs, the artwork will require a great deal of research and conservation work before it is able to be shared with the public. This artwork is an incredible asset to our historical Canadian collection. Born in 1838, British artist Frances Anne Hopkins came to North America with her husband, a Hudson’s Bay Company official. Traveling across the country with her husband, Hopkins would sketch and paint scenes of the voyageur’s life, an important aspect of Canadian history and a unique subject matter for a woman in the mid-19th century. Her works were featured at exhibitions of the Art Association of Montreal and the Royal Academy in London. The Hopkins family returned to England in 1870 where she lived until her death in 1919.

With funds from WAG-Qaumajuq’s annual acquisitions budget, made possible by ongoing supporters like you, the Gallery purchased some amazing Germaine Arnattauyuq prints. A recipient of the Governor General Award this year, Arnaktauyok is an accomplished artist and writer, based in Yellowknife, NT. She studied Fine Arts at the University of Manitoba, Commercial Art and Fine Craft at Algonquin College, as well as Printmaking at Arctic College in Nunavut. In her work, Arnaktauyok focuses primarily on Inuit myths, stories, and feminist narratives centred on birth and motherhood. She has illustrated and written several books, including The Inuit World (1970), published by Kinngait Press, which WAG-Qaumajuq also acquired this year. Visit Nuliajuk’s Story to view Arnattauyuq’s Sedna, Ruler of All Sea Animals (1994), and visit shop.wag.ca to purchase a tea towel inspired by The Inuit World.

An anonymous donor gifted an incredible work by Winnipeg-born artist Kent Monkman. Bête Noire (2014), is a large-scale, sculptural mixed-media installation measuring 192” x 192” x 120.” The work is a response to a diorama that will be familiar to many Manitobans and visitors to the province. You can still visit the 1970 diorama at the Manitoba Museum, displaying a Metis hunter on horseback during a 19th century buffalo hunt in the Red River valley. A staple of historical museum presentation, the diorama is known for displaying scenes from history with stiff wax figures and taxidermy creatures. Monkman has spoken about his fascination with museum depictions of Indigenous peoples, both at home and abroad at major institutions like the Natural History Museum in New York City. Bête Noire (a person or thing strongly detested or avoided) turns the table, presenting Monkman’s alter-ego Miss Chief Eagle Testickle not hunting buffalo, but instead hunting a Picasso bull.

Donated by Stephen and Hazel Borys, a small painting with big energy from Jamaican artist Milton George also joins the collection this year. The striking, intense colour and strong, urgent brushstrokes seem to animate the image beyond the edges of the paper. Best known as a visual storyteller, George’s sources ranged from politics, male/female relationships, religion, the self, and others whom he may have encountered while on his daily journeys through Kingston. The precise subject matter of Crouching Man is something of a mystery. Who is the figure in this painting? Is it a self-portrait? Is it someone from the artist’s life? Is it an altogether imagined subject? Or maybe a simple figure study? Certainly, it carries a typically masculine character – broad shoulders, thin waist, thick arms, toned chest, perhaps even the suggestion of a buzz-cut at the top of the head. The facial expression is both tricky to decipher in detail, yet somehow still sinister, disquieting, perhaps even furious! This acquisition helps to fill gaps that exist in the WAG-Qaumajuq collection for artwork created by Black artists.

Learn more about the WAG-Qaumajuq collection by visiting our collections page!

This small painting carries big energy. The striking, intense colour and strong, urgent brushstrokes seem to animate the image beyond the edges of the paper....
COVID-19 Update